I've got a view controller with a camera view, overlaid with a partially transparent dimming view. I need to punch a hole out of the dimming view to let the camera shine through in its full glory. My first crack was the code below, and it works:

Which produces what I want: 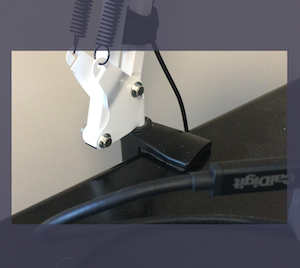 But it was redrawing too often (during transitions especially). I decided to have the mask only draw once, and I needed the view hierarchy set up. So I put it in viewWillAppear. Exact same body as above just different lifecycle method. Here's that result:

How in the world can the same code produce such different results?

Thanks to Tom Bunch for asking me about the state of our view controller's superLayer. At viewWillAppear, it has no super layer but at viewDidLayoutSubviews it has one. The class of the layer is a UIWindowLayer (which is a private class). Turns out that the super layer must apply some transform that causes our inversion to happen.

To get around the problem of the too many redraws I have instead opted for a simple hasAppliedCutout boolean state check during viewDidLayoutSubviews. It's not the cleanest solution but it will work for what I need without too much extra fuss.